for Purging Plugs in Steel Production 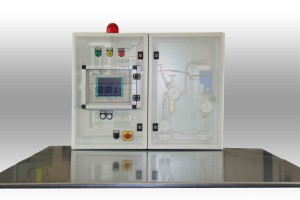 
The test unit TST is designed to test the purging plugs in the ladle preparation area. This is to avoid purging failures in the following heat and to prevent the purging plug from unnecessary excessive cleaning (burning, torching) with oxygen.

Nitrogen or compressed air is used as test media. It‘s not allowed to use natural gas or any other inflammable gas.

The actual flow rate is between a predefined upper and lower limit > the porous plug is in good working condition.

The actual flow rate is above the higher limit > there could be a leakage in the piping.

The actual flow rate is below the lower limit > the plug is blocked or partly blocked, oxygen washing could be required (depending on the plug type)

Oxygen washing support (Bypass): During the washing procedure with an oxygen lance, a continuous flow rate trough the plug is produced. The flow rate is monitored continuously, as soon as the flow rate exceeds a predefined limitation an indication is generated to stop further oxygen washing.

get information sheet as pdf